Talk about you March Madness! Let me give you an update…

My eldest sister is about to tie the knot at the end of this of month and I am way too excited about this because guess who gets to be a Bridesmaid!?! Yeah, I doooooo! And it’s got the point where everything is starting to come together and all the exciting stuff has come around like appointments with florists, choosing bouquets for the Bride and Bridesmaids, button holes for the Gents and all that jazz. Picking the perfect dresses, getting fitted into those dresses etc. But I think the most adorable production that has come from all of this, is the invites. The wedding has a Fairytale theme to it, therefore, my sister wanted the invites to have a specific look to them. So it was left to her loving family to help make them exactly the way she wanted. For those who have added me on Snapchat would have seen the hard work that went into creating these babies. The boxes were flat packed and yours truly had to make them up. The ribbon tie around the scrolls was cut and glued together and the boxes were finished off with pretty pink organza – and I didn’t know what organza was until I was tieing the bows – See, I learned something new from all this! And without being biased or anything… they looked AMAZING! 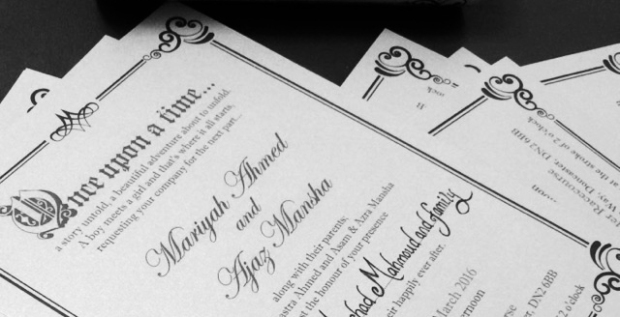 Alongside all of this wedding prep I have to keep reminding myself that I am still a student and I still have assignments and yep, still writing that dissertation!! That is due next month. Right now I do feel like Sleeping Beauty who has just woke from a 100-year slumber, except it’s more like a 2-month slumber because I did not see January or February go by at all! And there was no curse (as far as I know) or spindle wheels…or a Prince. So yeah, maybe Sleeping Beauty was a bad example but you get the gist. But the weird thing is that my dissertation also has a Fairytale theme to it! It was a complete coincidence but it’s as though everything around me has got me feeling like I’m in a Disney movie.

I remember at the end of the second year of uni we had to pitch our dissertation ideas to our tutors before the third year began. That was when quite a few people said to me “Don’t choose a topic that you enjoy, you’ll end up hating it when you’re finished.” And I understood where they were coming from because it is possible to  research things to the extent of having enough and wanting to be done with it. So I followed this advice and I initially had the idea to write a short story of some kind of dystopian or parallel universe, which I know has been done over and over and over before but I wanted to challenge myself into trying to make it unique from anything else that has been written before. And guess what? I tried it and failed at it, so it was time for the backup idea!

Now, I absolutely love the fantasy world. In the childhood days, Walt Disney held a special place in the hearts of the Ahmed household, getting us to believe the bird from Dumbo delivered all the babies in the world (still thought it until I was at an age I am too embarrassed to state) Ah, so naive! So it was easy to see where my dissertation would be heading, yep, down the path of Dragons and Pixies – there are actually no Dragons or Pixies in my dissertation at all – but there is a mix of poetry and prose in, so still a challenge, but a good one! My research involved a lot of readings of Alice’s Adventures in Wonderland and Through the Looking Glass, it’s been my favourite from a small age and recently I found a really cute edition of it in Waterstones here! With other reads such as Peter Pan, The Snow Queen, and Grimm’s Fairy Tales all counted as research I regret not writing about something I love sooner. I wasted so much time trying to look into a genre that I couldn’t really wrap my head around and I am really glad I changed my idea before it was too late.

It’s got pink flamingo’s on it! What’s not to like about that?!

So, for anyone who is about to go into their third year, it’s sometimes best to follow your own instincts. It’s good to get advice from others, but I wouldn’t follow it blindy! But maybe that’s just me, in my opinion, when you research something you’re passionate about then that passion and enthusiasm will show in your writing too. That makes sense right? But just remember everybody works in their own way. It’s worked for me because I am actually loving writing this dissertation. There have been quite a few hiccups along the way that have been smoothed out buI feel like my only problem right now is TIME! It’s coming around far too quickly.

My desk most days!

My sister’s wedding is before the dissertation deadline- win! – but being the sister of the Bride is apparently a big deal or something. Oh did I mention I was a Bridesmaid? Yeah? Oh, okay. Anyhoo, that means sharing my time doing all the things that Bridesmaids are supposed to do alongside the dissertation (as well as other assignments), being a good student and trying to attend all lectures and seminars whilst holding onto sanity and maintaining a social life. And I swear if one more person asks me what I am going to do after I finish Uni you’re just gonna get glared at and ignored by me because honestly I have no idea. I only have 2 months left of being a student and I’m trying my best in taking advantage of all the student perks. (Although my NUS card doesn’t expire until December 2017 – not complaining about that!) The next step for me is entering the big, scary, real world and I feel like my sister is kind of in the same situation as she’ll be entering a whole new world too – okay, the Aladdin pun was seriously not intended there.

It’s as though we have just read the words Once Upon A Time of this tale and it is beginning to skip all the pages in between. For my sister, according to the way of a lot of fairy tales, once you marry the Prince you have reached those closing words of Happily Ever After and she can now see those words there at the bottom of the page.

I’m kind of at my own Happily Ever After but instead of a Prince I’m hoping mine right now will be in the form of a degree! And very soon I’ll be starting all over again at the beginning with another Once Upon A Time as I step into the adult world of work.

So, now I’m gonna fix myself a cuppa’ and watch the new episode of Pretty Little Liars! But you can keep up to date with all things weddingy on my Instagram and add me on Snapchat too with username iramahmed95 where I’ve recently been updating and commentating a behind-the-scenes look at wedding preparations and other things that I see as potentially interesting.

A little dose of magic..

Lately I have been engulfed by the fantasy world of Princes, Princesses, Evil Sorcerers and Dragon’s, so much that I have even been dreaming about it – I’m not complaining though! And after watching and re-watching movies from my childhood (Peter Pan being my all time favourite, greatest line opener to – ‘All children grow up, except one.’) they all merged together and influenced me to write something that will hopefully open up the beauty your imagination brought to you as a child. Do you believe in fairy-tales?

THE VALLEY OF VINES

She was chosen as a leader, the one with courage that never boasts and she sensed the danger of the land to be threatened by new hosts.

Her silver hair and stony glare had lain upon a Prince so brave, just and fair. He must take control and save the land, but with a weakened soul and his trembling hand, a stronger force was needed from those with the ability to float.

With a gaping mouth and widened eyes the Prince rose with fright and surprise, he wiped his good hand across his forehead and whispered,

‘But surely my lady the Ghosts would want us dead?’ With an icy grip upon his shoulder, the Lady with a grin pleaded the Prince to

‘Serve his land’ through lips so tight and thin. A fire roared silently in the corner of the room, it coughed and hissed and spit, as her steel hand compelled him slowly, to sit. With a wince he spoke so low and discreet,

‘The Quest is simple my sweet, we are in search of a clue. The Valley of Vines is where all the answers lay, to the Ghosts who know all that is true. Time is precious so you must not delay our people are depending on you.’

So the Prince, with great haste mounted his horse and began to ride for the woods that bloomed so wild. The Valley of Vines hidden in the dead of the wood surrounded by stonewalls that consisted of the stale scent of blood.

In the thicket of the forest he continued on foot. The wood was alive with mischief, tricks and elves in search of loot. The staggered breathing of the Dragons, deep in their slumber led the Prince to tiptoe to the Iron Gate too high to crawl up or clamber.

‘Hello!’ He shouted, but no one was in sight when a sudden blast emerged and his body took flight! The Earth met his back and with a grunt and a curse he found the mighty iron open and through it he quickly dispersed.

An eerie chill overcame the Prince, a flashback led to his withered hand; he violently flinched away from the cool air that pinched his skin so grand. About him the vines hung, giant and thick lingering like venomous snakes with their teeth ready to sink. Further ahead was a clearing in which a stone throne was placed. The pain in his hand began searing as he prepared for what he was about to face.

The rock of the chair was smooth, with twisted vines wrapped around it like mothers protecting their youth. The Prince sat, his body rigid and cold, the presence of the Ghosts was strong, but a single one he could not behold.

‘I have a message from the Queen’ his voice was an icy gasp, if only one would allow itself to be seen then the sudden thought daunted that this was a trap!

The plant snaked and slithered about his waist, it tightened and squeezed until it was blood in his mouth that he could taste. No limbs would function; his arms lay in a state of paralysis preventing any discussion, his head has sunken. Frostbitten vines wrapped him up to endure a fate of frozen solitude, a handsome statue for all to view the consequences of treason, and what the Queen would do to you.

Hope you enjoyed it!

P.S. My sister and I went for a little nature trail (when I say ‘little’ I mean a six mile walk round some nature gardens! As I walked around the place I found began to find the surroundings more and more magical, the whole setting also tied in perfectly with The Valley of Vines. So stay tuned for my next post because it will be all about our adventure out there, spoiler alert: to continue with the fairy-tale theme, it involves some kissing of frogs! And some nature/landscape photography by yours truly! 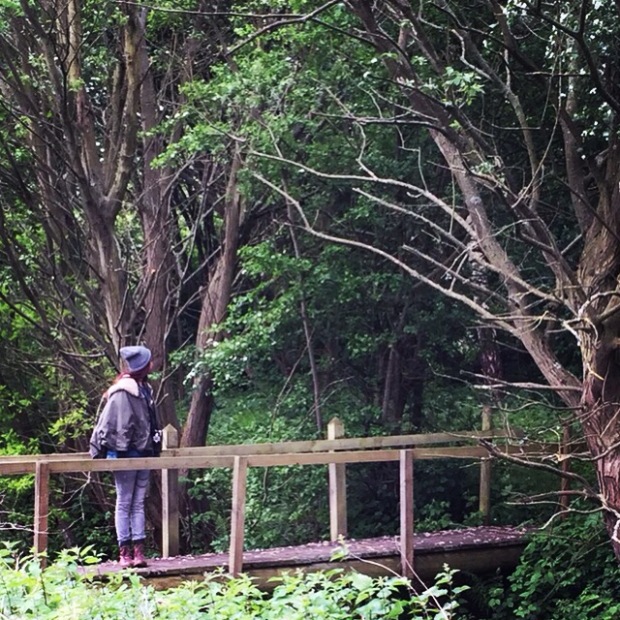